Slater Educational Building
Joseph Slater was very active within the community and served as its President from 1912 to 1925.  During that time, Joseph devoted time, money and labor to Cassadaga's development. He helped lay sidewalks, took charge of maintaining the grounds and other tasks around the Camp. Joseph Slater also saw that a water tower was constructed on the west side of the Camp allowing water to be piped to homes throughout the community.
He built a house on the grounds in 1923 and this structure became the primary residence for his son Joseph William Slater and his wife Julia.  Julia was on the Board of Trustees and Secretary/Treasurer, she organized and arranged dances in our Davis Building during World War II for soldiers stationed in Sanford, Florida. Even after her husband passed to the Higher Side of Life in 1952, Julia continued her activities in our community. 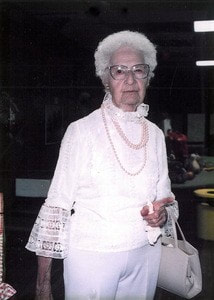 Julia Slater
Julia was an avid gardener, and was well known as the "flower lady" to Camp residents, having often provided flowers for Sunday Church Services.  The entire front yard was filled with flowers and the fragrance permeated the town. She passed to Spirit on April 17, 2004 at age 107.
In 2018, the board of trustees approved the B. Anne Gehman Library to be part of the Slater House. A Camp member started the project in 2015 when Rev. Anne, a world-renowned medium who got her start in Cassadaga Spiritualist Camp, gave the Camp hundreds of books from her personal collection.
The library is open from 4 p.m. to 7 p.m. on Wednesdays, or by appointment. There are more than 2,800 books. Other members have shared some of their collections as well.
BACK TO THINGS TO DO PAGE