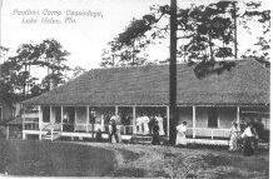 Andrew Jackson Davis (AJD) Building, Bookstore, and Information Center, circa 1905
Since the 1900’s, the Andrew Jackson Davis Building has been and still is the hub of activity in the community. When the construction was completed in 1905, the original purpose of the building was to hold lectures about Spiritualism. At that time, it was called the Pavilion. It was not long before the Ladies Auxiliary and the Camp began to host a variety of entertainment events including teas, card parties, concerts, plays, an annual masquerade ball, potluck dinners, concerts and all kinds of activities which were widely attended by the townspeople. People began to refer to the building as the Recreation Hall.

​In the summer of 1974, the building went through a renovation changing its appearance from a rustic barn-like structure to what you see today. In March of 1976, the Camp decided to name the building after a historical figure of Spiritualism, Andrew Jackson Davis. Andrew Jackson Davis was considered to be one of the great seers of the ages. Born in 1826, he predicted the coming of Modern Spiritualism which occurred in 1848. Davis left his work embedded in the Spiritualist Movement as a noted lecturer of its philosophy.

Stevens Street in the early 1900s.
He was a prolific author of some 30 books on the subject and was credited with establishing the first Spiritualist Lyceum or Sunday School. Lyceum is still conducted here on Sunday mornings at 9:30 and you are invited to join us.

​The front entrance to the Camp was located at Marion Street and Cassadaga Road. There was a guard shack and a post. When the Cassadaga Hotel fire of December 26, 1926 happened, the entrance was moved to Cassadaga Road and Stevens street. The N. N. Jacobs Lumber Company of Deland restored the new entrance gates donating brick columns finished with stucco and embellished with urns completed with a drinking bucket for water.

Original entry to the Camp on Marion Street.
BACK TO THINGS TO DO PAGE